From Degree Forum Wiki
Jump to navigation Jump to search

In order to get credit for completing Sophia.org, you will need to have it added to your ACE transcript. As of November 2020, this is done using the Credly/Acclaim platform (see the ACE page for more details). This is a fairly straightforward process but steps have been provided for students who are having difficulties figuring out what needs to be done.

Credits from before October 2020[edit]

If you completed courses at Sophia prior to October of 2020, you may still need to contact support via chat and ask them to manually process your courses to have them added to your Acclaim account. At this point in time, you should be able to claim all credits as outlined below but it is possible that one or two accounts may still be having issues.

Credits from November 2020 and after[edit]

The first step for claiming an Acclaim badge from Sophia.org 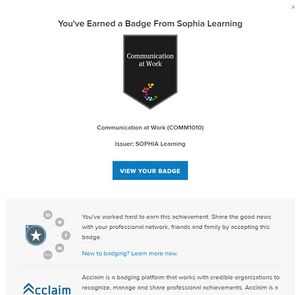 The second step for claiming an Acclaim badge from Sophia.org
Retrieved from "https://degreeforum.miraheze.org/w/index.php?title=Sophia.org_Acclaim_Process&oldid=3659"
Category:
Cookies help us deliver our services. By using our services, you agree to our use of cookies.